Purushottam Das Tandon was born in Allahabad. After obtaining a degree in law and an MA in history, he started practicing in 1906 and joined the bar of Allahabad High Court in 1908 as a junior to Tej Bahadur Sapru. He gave up practice in 1921 to concentrate on public activities. Tandan ji worked as Professor of Hindi at Victoria College, Gwalior. 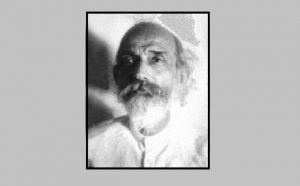 He was a member of Indian National Congress since his student days in 1899. In 1906, he represented Allahabad in the All India Congress Committee. He was associated with the Congress Party committee that studied the Jallianwala Bagh incident in 1919. He was also a part of the Lok Sevak Sangh. In the 1920s and 1930s he was arrested for participating in the Non-Cooperation movement and Salt Satyagraha respectively. He and Jawaharlal Nehru were among the people arrested even before Mohandas K. Gandhi returned from the Round Table Conference at London in 1931. He was known for his efforts in farmers’ movements and he served as the President, Bihar Provincial Kisan Sabha in 1934. He also remained President of Servants of the People Society (Lok Sevak Mandal), a social service organisation founded by Lala Lajpat Rai, in 1921.

He worked as the Speaker of the Legislative Assembly of the present-day Uttar Pradesh for a period of 13 years, from 31 July 1937 to 10 August 1950. He was elected to theConstituent Assembly of India in 1946.

He tried for the position of the President of the Congress Party unsuccessfully against Pattabhi Sitaramayya in 1948 but contested successfully against Acharya Kriplani in the controversial and difficult 1950 election to head the Nagpur session. He soon resigned from Congress’s president post because of differences with Nehru and as Nehru’s popularity was needed for winning elections. Nehru, while being the PM, also became the president of Congress for 1951 and 1952. He was elected to the Lok Sabha in 1952 and the Rajya Sabha in 1956. He retired from active public life after that due to indifferent health. He was awarded the Bharat Ratna, India’s highest civilian award in 1961.

Views on Partition of India:

On 12 June 1947, the Congress Working Committee met and passed a resolution accepting the Partition of India. When the same had to be ratified on 14 June by the AICC, one of the dissenting voices came from Tandon. On that occasion, he said, “Acceptance of the resolution will be an abject surrender to the British and the Muslim League. The admission of the Working Committee was an admission of weakness and the result of a sense of despair. The Partition would not benefit either community – the Hindus in Pakistan and the Muslims in India would both live in fear.” Thus, it can be argued that he was against partition. However, another school of thought believes that his reluctance in sharing power with theMuslim League in the provinces after the 1937 elections with the argument that the Congress Party has achieved majority on its own may have precipitated matters towards partition.

He and Jawaharlal Nehru had good relations in the beginning; Nehru who commended the “No Tax” campaign started by Tandon in 1930. In the 1940s, the differences between them increased. While Tandon was not perceived to be power-hungry, his relation with Nehru was not on good terms and he was believed to be a protégé of Sardar Vallabhbhai Patel. In 1950, his successful election to the post of Congress President against Acharya Kriplani, who was widely believed to be backed by Nehru, put the latter in a tight spot. The relations between the party and the government suffered during that period. Subsequently, it became a sort of unwritten norm for the leader of the government to also be the party president or at the least, have a pliable candidate in the post.

After Partition, Patel and Nehru developed differences over how to deal with the Muslim minority of India, especially as anti-Hindu violence reigned in Pakistan. Nehru argued that India’s constitutional commitment to the security of its Muslim minority did not depend on how Pakistan treated its Hindu minority. Tandon, being close to Patel, differed with Nehru on this. So, Nehru launched an internal political battle against his own party’s elected President and got the party’s organisation to support his idea of secularism. Subsequently, it became clear that the nation’s prime minister cannot be opposed by his party’s elected president and Tandon resigned from the post of Congress’ president to give way for Nehru. Tandon was elected president in 1950 and then Nehru was elected twice in 1951 and 1952.

Despite Gandhi and other leaders advocating the adoption of Hindustani, a mixture of Hindi and Urdu, as the National language, he insisted on the usage of Devanagari script and the rejection of the Urdu script as well as words with Arabic-Persian roots. This led to him being called a political reactionary by Nehru. His attitude towards the Sanskritisation or making the language more formal was also controversial. His insistence on the usage of numerals of Devanagari script over the international system and his debates in the constituent assembly on adoption of Hindi as the official language irked Dravidian leaders.

He was conferred the title of Rajarshi. According to recorded history, the first Kshatriya (Khatri) to have received the title was Raja Vishwamitra and Purushottam Das Tandon, perhaps the last. 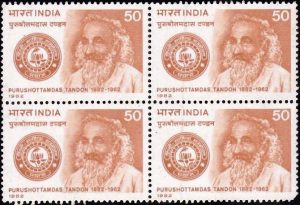 All information entered is personal to the author. Any modification or changes must be addressed to the author.
Post Views: 84
Share:
Tags:
Bharat RatanEncyclopediaHistoryIndiaWorld