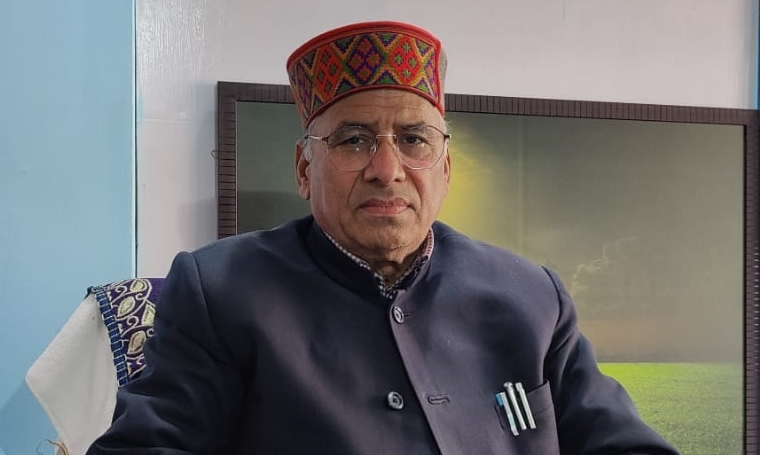 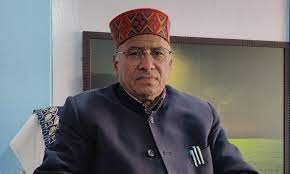 Inder Singh Dogra is a renowned industrialist in the district Bilaspur, Himachal Pradesh.

He was born on May 4, 1954, in village Jangla, post office Gehrwin, district Bilaspur, Himachal Pradesh to Jyoti Ram and Kailashi Devi. He has two brothers Ishwar Das and Prem Singh and two sisters, Mathura Devi and Kamala Devi. Furthermore, he married Hari Priya in November 1985, and they have three sons, Rishabh, Dev Vrat, and Vinayendra.

He completed his early education at Gehrwin School situated in Bilaspur. After that, he completed his graduation from Degree College Bilaspur. Meerut is the place where he earned his post-graduate degree in Geography. As soon as he received his post-graduate degree, he realized that education does not imply finding work and earning money. As a result, rather than securing a single job, he resolved that something should be done to create a working environment for others by creating several jobs. After receiving training in several types of entrepreneurial courses, he launched the hosiery industry in Bilaspur, Himachal Pradesh, in 1980 to make this dream a reality. Mr. Dogra maintained his studies in addition to his business pursuits. He was introduced to the Rashtriya Swayamsevak Sangh (RSS) in 1982. After joining the RSS, he played a variety of organizational roles. Additionally, he managed the Himachal Shiksha Samiti schools run by Vidya Bharti, a well-known educational organization. In addition, he was inducted into the Indian History Congress as a Life Member. He took part in several debate sessions at the Indian History Congress’s national conferences, which were held in various universities around the country.

After that, he became a member of Akhil Bhartiya Itihas Sankalan Yojna, and he got the opportunity to get blessings from eminent scholars and historians from all over the country. He was also the General Secretary of Himachal Pradesh Udyogpati MahaSangh. At present, Mr. Dogra is bearing the post of Margdardshak of the Bhartiya Itihas Sankalan Yojna Samiti Himachal Pradesh and is also the Vibhag Adhykash of Vishwa Hindu Parishad. He is also a member of the Himachal Pradesh Sahityakaar Parishad. Also, he is a member of Laghu Udyog Bharati and is the Managing Director of Dogra Hosiery, Dogra Vastra Udyog, Jeevan Jyoti Nursing College, Dogra Veterinary Pharmacist College, and Dogra Industrial Training Institue.

Inder Singh Dogra, President of the Himachal Pradesh Anveshan and Vishleshan Sanstha, at a press conference: 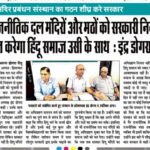 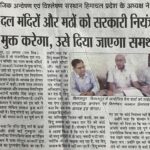 All information entered is personal to the author. Any modification or changes must be addressed to the author.
Post Views: 344
Share:
Categories:
India / Bharat
Content Tags:
BilaspurFamous PeopleFamous PersonalitiesHimachal PradeshItihasaPublic Figure