Login or Sign Up
Jageshwar : Dham and Jyotirlinga, Uttarakhand 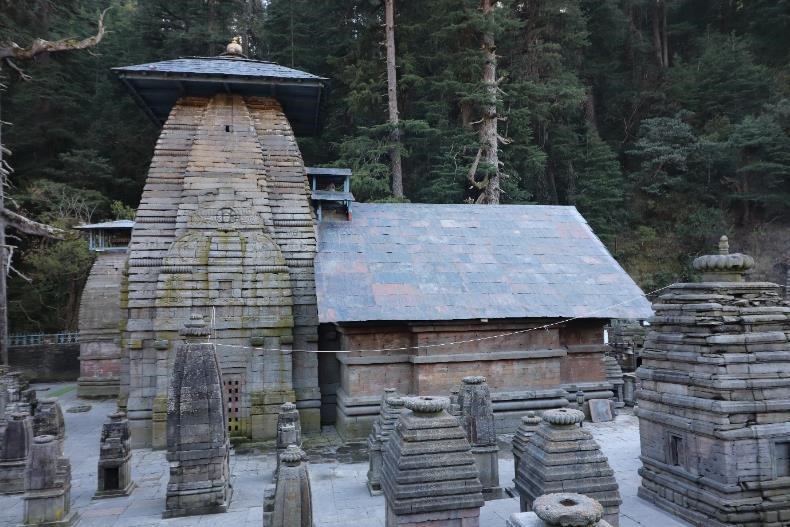 Jageshwar is located 35 kms west from Almora city in Kumaon region of Uttarakhand state and is a famous pilgrim centre due to two important reasons. First, it is one of the Dham of Uttarakhandand second, it houses one of the Jyotirlinga, Nageshwar Swayambhu Jyotirlinga (though Nageshwar Jyotirlinga is also said to be in Dwarka, Gujrat). The temple complex has around 125 small and big stone temples dating to 8th-18th CE. Jageshwar is associated with various folklores of lord Shiva. It is believed that Shiva, who was in deep sorrow after her consort Sati jumped into the yagna performed by Daksh, had performed hard penance in the forests adjoining modern Jageshwar. The journey of 35 kms to Jageshwar through serpentine hilly roads, is quite panoramic with view of snow covered Nanda devi peaks, and idyllic green landscapes all around. The Jataganga river which accompanies en-route amidst dense forest closer to destination makes the journey quite soul soothing and serene [Pic 1]. 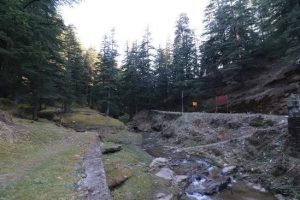 A small Jageswar Museum is close to the temple complex at about a kilometre distance which houses approximately 60 beautiful sculptures of many deities including Shiva, Parvati, Ganesh, Kartikeya, Vishnu, Lakshmi, Surya, Ganga and also some royal figures, These items were recovered from sites of various temples at Jageshwar and its vicinity (ranging from 8th to 14th century CE) during excavations [Pic 2] 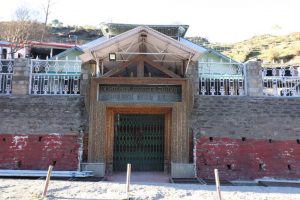 The largest temple complex at Jageshwar is located amidst dense forests of tall Devdar (himalayan cedar) and pine trees with river Jataganga flowing in between [Pic. 3]. Despite temples being looked after by ASI (Archaeological Survey of India) as monuments of national importance, elaborate worship is practiced in many temples.  The temple complex has a display board indicating parikrama path for offering prayers to the deities housed in various temples of temple complex. 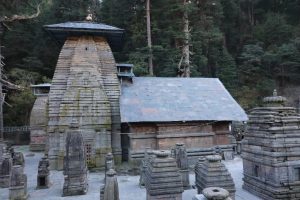 The Jageshwar temple (also known as Yogeshwar) is believed to house the Nageshwar Jyotirlinga [Pic 4]. Though many people believe that the Nageshwar Jyotirlinga is actually located in Gujrat 13 kms near Dwarka, the locals here, in support of their claim, say that Jageshwar and nearby forests were favourite of nagas (serpents) and for this reason many temples were constructed in Jageshwar and nearby areas having ‘nag’ in their name. These include Verinag, Kaliyanag, Dhaulinag etc. And due to a large number of Naga temples in the vicinity, the area also became famous as ‘’Nagesh” as mentioned in Puranas. 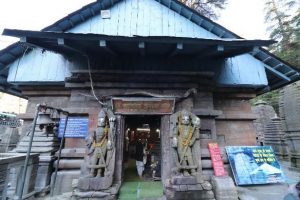 Two larger-than-life sized, four-armed dwarpalas (gatekeepers) guard the temple. One dwarapala holds a skull in one of his hands, a rosary in second, a fruit in the third while fourth hand cradles an object. The other dwarapala, holds a serpent along with other items. The lingam in the sanctum is in the ardhnarishwar form, with a smaller one protruding out of the main lingam.

Mahamritunjaya (one who conquered death) temple, is the largest of all the temples in the complex and the second most important for devotees. During the month of shravan, elaborate festivities are organized here.

A very huge Deodar tree towards the southern side of temple complex [Pic 5], the trunk of which after a growth of about 100 feet got bifurcated is revered as manifestation of Shiv-Parvati by the devotees. Undoubtedly, such beliefs of the people not only provide divinity to whole environment but also help in preserving the nature in its pristine form. 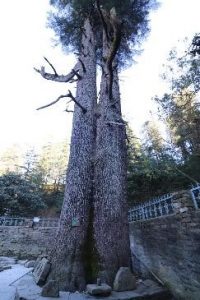 Pushti Devi temple near Mahamritunjay temple is dedicated to Mahisashurmardini and is believed to one of the 108 siddhapeetha. Most of the temples in Jageshwar are built in northern “Nagara” style of architecture. The praveshdwar (doorways) of the temples have many ornamental shakhas (vertical bands) and depict many deities like Ganga, Yamuna, Nandi, Mahakala and various decorative motifs like srivrikshas, nagpasha [Pic 6] etc. 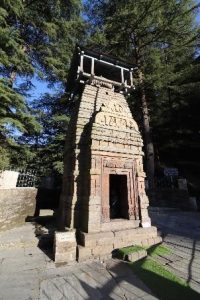 Mahamritunjaya, the largest temple in the group is most elaborately designed with a four-pillared entry mandapa followed by the mukha-mandapa (main hall) leading to an antarala (vestibule) then finally to the square sanctum [Pic 7]. The tower of the temple is mostly curvilinear and multitiered and its top covered with a wooden canopy. The front face above the gateways depict Mahesh-Trimurti (three heads of Shiva) and Gajsimha (lion pouncing upon elephant ) [Pic 8]. 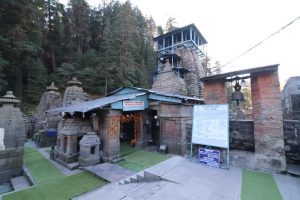 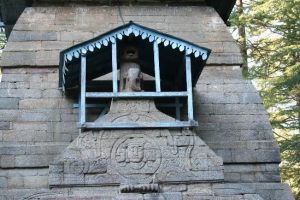 Katyuri Kings (7th-14th CE) are believed to have constructed and maintained many  temples during initial period. Later Chand Kings (15th-18th CE) patronised these temples by donating many villages for their upkeep during their reign. There are few inscriptions in Sanskrit and brahmi scripts in the complex which speak of devotion, renovations and land donations by various kings (Katyuris, Mallas and Chands) spanning from 7th to 18th century CE for maintenance of temples. There are a huge number of small temples having single small cell with a lingam inside, built in close vicinity to the larger temples. These appear to be votive temples constructed by the devotees whose wish would get fulfilled after praying in the larger temples.

One may notice a cremation ground towards southern side on the banks of Jataganga river just adjacent to main temple complex, a rare combination of temple and cremation ground in the same vicinity. Locals believe that they would attain moksha if they are cremated here and for this reason people even from far off places come here for performing the last rites of their dear ones. Kubera and Kalika devi temple  is situated about 200 meters away from main temple complex and could be reached after crossing the Jataganga river through a small bridge.

Near to Kalika Devi temple is a brahmkund [Pic 9], believed to have medicinal value due to its sulphur rich water which is used by pilgrims for performing many religious rites such as  Yagopavit, Shraddh, Tarpan, Mundan etc. Dandeshwar group of temples, about 15 in number, spread on either side of the river Jataganga can also be visited which is just about a kilometer away. 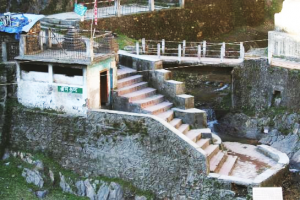 All information entered is personal to the author. Any modification or changes must be addressed to the author.
Post Views: 455
Share:
Categories:
Ancient TemplesCultureIndia / Bharat
Content Tags:
BharatEncyclopediaHinduHistoryIndiaItihasaSanatana DharamaTemples